I often think about a particular sort of conflict or contradiction in the way I feel about the world. One feeling that has been core to my view of the world around us is how much damage has been done by the transactional nature of society, the economy of life. This manifests both in the common feelings about the exploitive nature of capitalism, as well as the harm we cause ourselves by measuring our interactions with others like an exchange of currency. Somewhere down this path, I inevitably touch on my feelings about materialism. Valuing things above people, their feelings, and the genuine execution of life has always felt like a source of great suffering, and a contradiction of the beautiful nature of people to be open, vulnerable, and generous.

The particular place where I feel conflicted with that belief comes in the joy I get from making things. Intentionally creating something, for yourself or for others, leads to an appreciation and attachment to an item that seems contrary to a resistance of materialism. Luckily, I’ve learned over time to acknowledge and observe thoughts like that without feeling an urgency and need to reconcile them into a perfect system of understanding.

Creating things, particularly for other people, brings me great joy. And sometimes those things in turn bring about joy in the recipient. There is a subtle magic in the act, and creating space for that is more valuable to me than adherence to the concept of opposing materialism. Ideas are great, but experience is always more important to me. Here’s a bit of a story about some recent creations that have made my world feel more rich and wonderful, regardless of their lack of practical value.

There are a number of projects that seems to be common in the pursuit of woodworking expertise. Things everyone seems to eventually try their hand at, almost like rites of passage. I’ve recently made 2 of these sort of projects, an end grain cutting board, and some wooden hammers.

Cutting boards have obvious use, and it’s nice to add some meaning to one of the random objects that collect in our lives. I felt an additional appreciation for this small project, because it amounted to collecting some scraps, offcuts and discarded pieces laying around my garage, and creating something useful from them. In a small way, it made me feel connected to the stories of indigenous peoples using all parts of a slain animal. 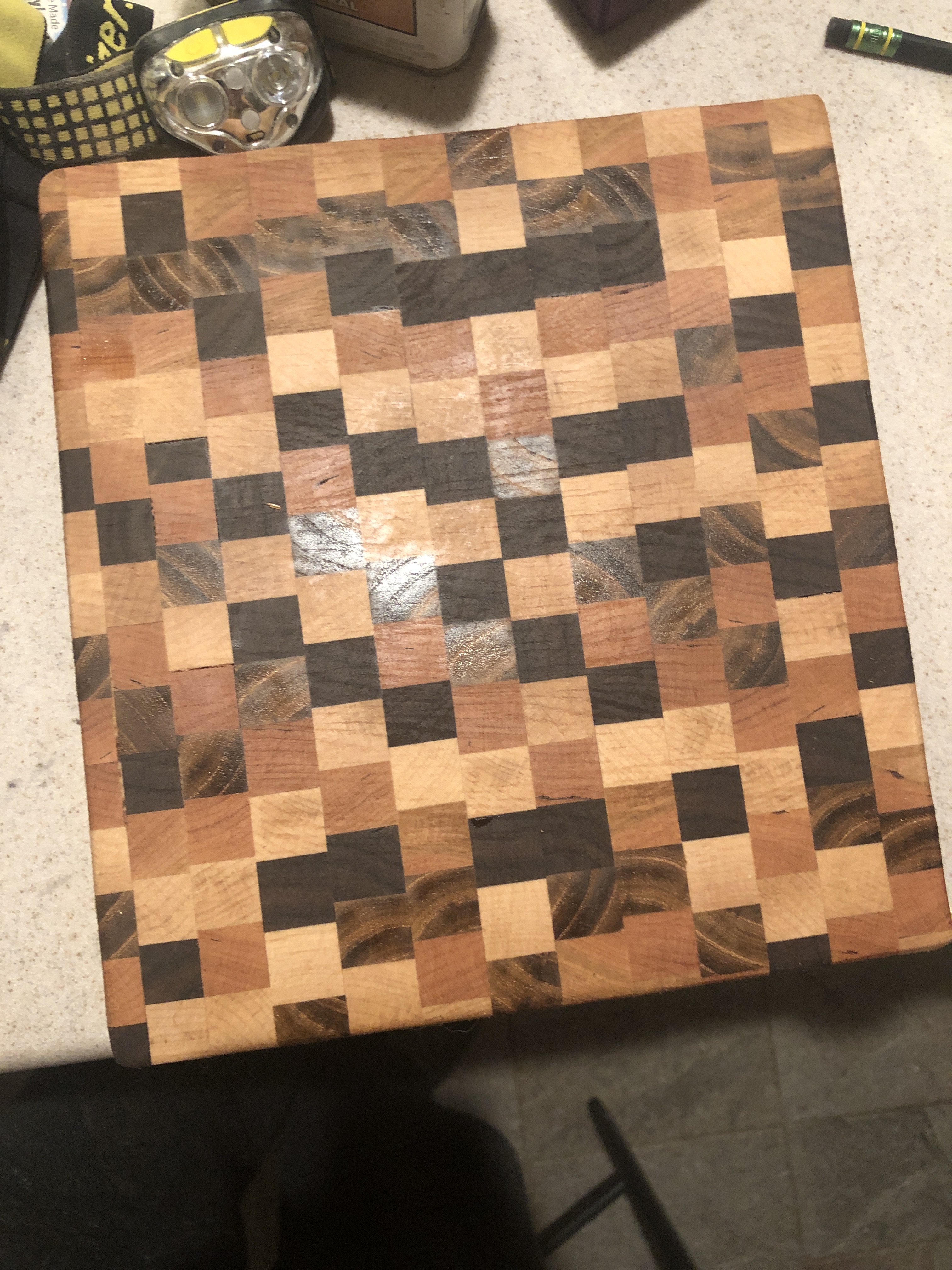 This cutting board is the result of glueing together some scrap maple, cherry, walnut and acacia I had laying around.

The more interesting project has been making wooden hammers. While I’m sure many are created for a practical purpose, to aid in future woodworking, I was just screwing around. Using some cast aside pieces of walnut, cherry and wenge, and turning a piece of Lignum Vitae I had sitting around, I made myself a hammer. I wouldn’t go so far as to call it a woodworking mallet, or a dead blow hammer. It’s unwieldy, too large, oddly shaped, and really just an ornamental piece. But it reminded me of the stories of Mjölnir, Thor’s hammer used to defend the gods of Asgard. What it lacked in practical use, it more than made up for in whimsey.

My girls, with the great wisdom of childhood, had no thoughts about the impracticality of such a creation. They thought it was neat. That appreciation and acceptance gave me the freedom to let down my pragmatic judgements, and led to a side hobby is making something just for the sake of enjoying it.

The second hammer I made was a gift for Natasha’s son Revel. During a short visit to return some forgotten items, I was told of a game Revel has been playing for years. Jumping around the house, blasting things with his own magic. Originally, Revel used a particular favorite implement to channel his magic, and over time learned that he could channel his power with or without a magical implement. Again I was reminded of the mythology of the Norse, which has always been a particular favorite, and decided that Revel would probably love a magical hammer of his own. 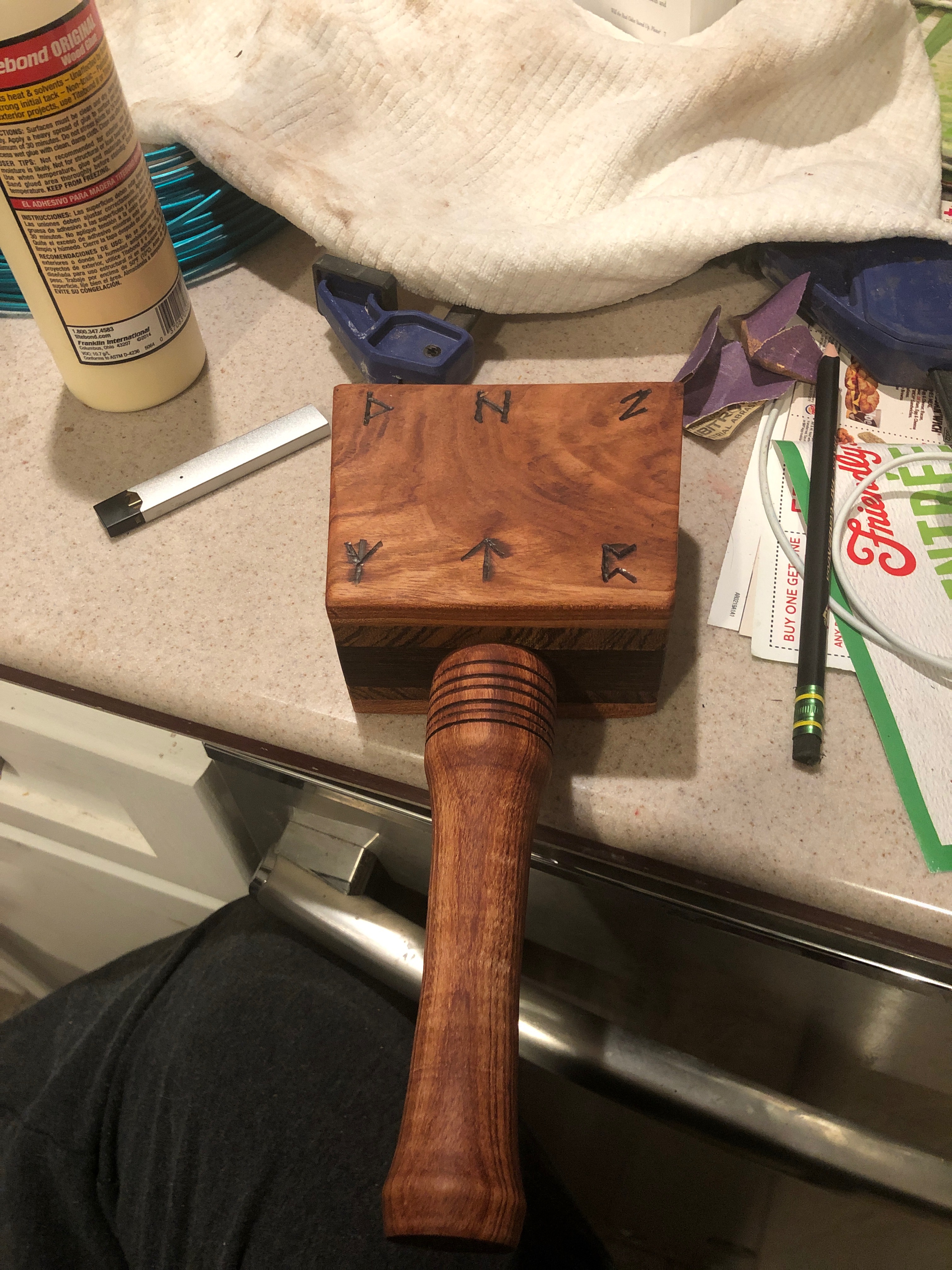 Rev’s hammer was the first to include some burnt in Norse Runes. It made me happy to think about giving a gift to a child that included some old magic, and the idea of laying down some intentional meaning to the object added something fun to the work. It was received very well, and predictably Olive and Nora asked for hammers of their own.

My favorite part of this experience was the day I gave the girls the hammers I had made for them. They were so excited to have something of their own, and what could be better than a magical hammer. This also gave me the chance to tell the girls a piece of one of my favorite parts of Norse Mythology.

I explained to them, that like the great hammer of the gods Mjölnir, these magical hammers we alive themselves. The hammers themselves control their own magic. If you use them for good purposes, the hammer will lend all their magic to aid you. But if you use your hammer for cruel or bad means, such as hurting someone or to break things that belong to others, they will withhold their magic, and refuse to lend you their true strength. The girls beamed with happiness thinking that their new magical tools would help them if they were kind and good, and knew to be careful not to do harm with them.

Of course I am working on making Natasha a magical hammer of her own. It’s still a work in progress, but is coming along nicely.

While these things aren’t going to solve any great problems in our day to day lives, I believe there’s something great about being given a magical implement. Unless of course any of our homes are invaded by Frost Giants, in which case we’ll all be thoroughly prepared.

(I’ve added descriptions of the materials, and the runes and meanings to these images over at Phil’s Woodworking)